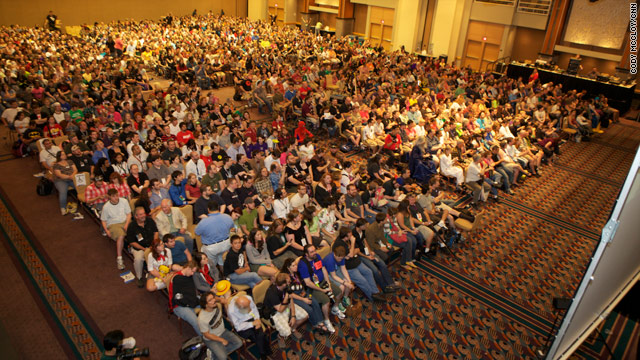 At conventions such as Dragon Con (as well as Pensacon, where I am on staff), there is so much to do that you can’t possibly see it all–mainly because multiple things happen at once. Most people only think of cons in a singular sense, meaning they go to buy things at the vendor floor, or they want to meet and get autographs from celebrities they admire, or they want to cosplay. There is one aspect out of many that attracts them. For me, the big draw is attending panels, which is the main reason I gravitated to handling the programming at Pensacon.

Of course, when you mention panels, to most people that means the ones where celebrities talk about their careers and shows that made them famous. These are a great way for the general public to interact with stars that they would normally never get a chance to see in person. The celebs tell stories that are hopefully amusing, and often the audience is able to ask the questions. These can be very fun, and at times unexpected things happen. A story was told today about a certain Star Trek star who stormed off the stage in tears because of what one of her co-stars said to her during the panel. I have also heard stories of actors saying very inappropriate things that are shocking or that reveal too much from behind the scenes. The audience was not allowed to record a particular unnamed Pensacon guest because she had a tendency to say things that would not be good to be shared on social media.

I’m currently at the end of Day 2 of Dragon Con (though in reality the third day since events and parties began on Thursday, even if unofficially). So far, I’ve seen Battlestar Galactica‘s Richard Hatch promote Axanar, a Star Trek based web series; James Urbaniak, the voice of Dr. Venture in The Venture Bros., discuss his career both in front of the camera and behind the microphone (as well as high school productions); Gary Lockwood and Keir Dullea share their experiences making 2001: A Space Odyssey; Nicholas Lea and Jerry Hardin (Krychek and Deep Throat respectively) discuss their tenure on The X-Files; Edward James Olmos, B.J. Britt, and Eddie McClintock be wildly entertaining while dishing on Agents of S.H.I.E.L.D.; and Garrett Wang converse with Terry Farrell about being on their particular Star Trek series.

While listening to celebrities is enjoyable, I also get satisfaction out of other types of panels, such as ones focusing on filmmaking. I attended a meet and greet this morning with the creators of the films playing at this convention’s film festival and another one about the horrors some filmmakers have faced on set, which tend to be fairly universal problems such as locations gone wrong, equipment failing, issues with actors, accidents, and loss of footage. Also from a professional standpoint, I try to make it to writing panels to hear advice from published authors. For instance, two today were YA Writing and Publishing, which had information that applied to any genre of novels, and Legal Issues for eBook Authors and Publishers, a topic relevant to me since I am currently publishing online rather than taking the traditional route. The themes of panels are very varied, covering gaming, cosplay, classic movies and TV shows, scienc and technology, and so on. There is something for everyone, no matter what your interests are. One panel that drew my interest was one about the accuracy (or lack thereof) of science in movies–an idea that just might be presented at Pensacon 2016.

One nice thing about these smaller panels is that you most likely will be able to get into them, unlike the celebrity panels that can have lines over an hour long and often fill up. Members of the community and experts in their field come to conventions to share their passions, skills, and insights. For me, it’s part entertainment and part learning things that I can apply to my professional life, and that’s well worth the price of admission.