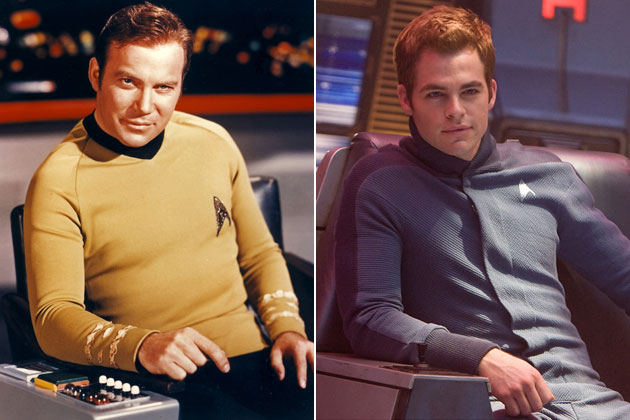 It seems that with fans of Star Trek (I will refrain from referring to them as Trekkies or even Trekkers), you can tell what generation they belong to based on which series or era they align themselves to. For instance, older fans may only be interested in the exploits of Captain Kirk and Mister Spock, whereas to those who grew up in the ’80s and ’90s, Captains Picard, Janeway, and Sisko are the ones to root for. Current kids might only associate William Shatner as the old guy from the Priceline commercials, and to them Chris Pine is the one and only Captain Kirk.

I was born smack in the middle of the original run of the classic series, so I didn’t become aware of the show until it was well into syndication. Even then, it was embarrassing to admitting to my friends that I watched the show, let alone enjoyed it. I wasn’t a rabid fan as a child, but I watched it when I could. I discovered a book on the making of Star Trek while visiting my uncle and poured through it. I think it was then that I really gained appreciation for the show due to the detailed plans of the Enterprise and how in-depth the book’s author went in describing the stories and their concepts. As a teenager, my love for Trek grew with the release of the films, and then I discovered the novels and read as many as I could get my hands on.

During my first year in college, I heard that Gene Roddenberry was developing a new series. I experienced a mixture of excitement and trepidation–I so badly wanted to revisit the universe he created on TV, but how could anyone possibly replace Shatner, Nimoy, and the rest of the original Enterprise crew? So with nervous anticipation, I watched the pilot to Star Trek: The Next Generation, “Encounter at Farpoint” and discovered that it wasn’t terrible, but it wasn’t great either. In many ways, it was much like the original series, though that wasn’t necessarily a good thing considering how far television series had come in two decades. The effects were okay, the planet sets were horrible, the aliens were often hokey–but the cast of characters were enduring and the social commentary was present, even if often heavy-handed. I stuck with the show, suffering through occasionally terrible episodes, until about three-fourths of the way through the first season when two things happened: 1) they killed off a major character (Tasha Yar, in an off-handed way by an objectively silly creature); and 2) they introduced a conspiracy within Starfleet with characters returning from a previous episode now taken over by bodysnatching aliens. These two episodes excited me because now there was an unpredictability in an otherwise formulaic show as well as adding an unexpected danger and edge to a series that had up to this point played it safe.

The Next Generation grew beyond its roots as the cast gelled into a “family” with each character given respect and equal airtime; the quality of effects, makeup, costumes, and set design improved; and the writing and direction became more sophisticated. It was must-watch TV for me. I was there for the premieres and finales of Deep Space Nine and Voyager (I unfortunately drifted away from Enterprise mid-stream) and even followed Picard and his crew to the big screen. But life goes on and burn out happens. For a period of time, Trek was absent from both TVs and cinemas. For a while, it looked like that was the end of Roddenberry’s creation.

With the announcement of a big budget “reboot” by J.J. Abrams, I felt the same excited trepidation I had when I heard about TNG. Could anyone ever replace the originating actors in their iconic roles? Would Star Trek work in the 21st century? With the critical and box office success of 2009’s Star Trek (which I feel is a bit presumptuous to take that name with no subtitle, as if it is the first and only movie with that moniker), it seems that our adventures into the final frontier are going to continue. I enjoyed that movie, even with its many flaws. The casting was well done, and of course Leonard Nimoy’s appearance gave us Trek fans permission to like that movie. Star Trek Into Darkness was even more flawed, but still held up as an entertaining film. Did it live up to its legacy and was it embodied with Gene Roddenberry’s vision? Probably not, but then again some of the movies and episodes of TV series that came before fell short as well.

There are a vocal number of fans who not only denounce this pair of films (and presumably the upcoming Star Trek Beyond), but actually disown them. “They aren’t Star Trek,” these fans say. There are a number of reasons for that: 1) it’s a new timeline, so previously accepted canon has been beamed into oblivion; 2) the focus is on action rather than exploration or ideas; 3) these films are made for a wide audience and not just for fans from the past; and 4) the fan service that’s done (such as the Kirk/Spock role reversal from the ending of Wrath of Khan in Into Darkness) feels like pandering and is not story-driven. Can these problems be fixed in future entries? Of courses.

The new audience who never experienced Star Trek in its nearly 50 year history and are only exposed to Abrams’s movies may have a skewed perception of this saga, but that does not make their enjoyment any less valid. Hopefully it will be the gateway for these young fans to discover what made the show last for literal generations by introducing them to past shows and motion pictures, or even fan films on the web. And maybe the popularity of these films will pave the way for other official content to be produced.