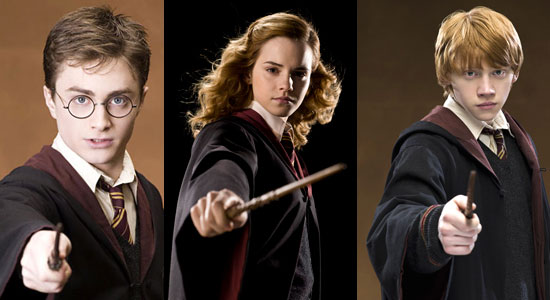 I just finished reading an enjoyable middle grades fantasy novel by the fun and personable Lindsay Cummings called The Fires of Calderon (the first book in the Balance Keepers series) and something occurred to me. Quite often in stories, especially ones with a flair for adventure, you have three main characters consisting of two males and a female–the hero, the girl, and the sidekick.

Take, for instance, the Harry Potter series. Of course, Harry himself was the protagonist, and he shared all of his adventures with his best friends Hermione and Ron.  Even though Hermione and Ron ended up together and the cast featured countless characters who fought good old baddie Voldemort, their adventures always boiled down to those three as a team.

The original Star Wars trilogy starred the iconic characters of Luke Skywalker, Princess Leia, and Han Solo. It can be argued that this trio was constantly surrounded by others–Obi Wan, Chewbacca, the droids–and if you really examine how much screen time the three shared throughout their three movies, they actually spend most of it separated. Yet, their bond is so strong that it’s hard to not picture the three of them together when thinking of this series. Even in the credits, the three actors are listed together.

Even the prequels got into the act. Episode One focused on Qui Gon, Padme, and Obi Wan (with little Anakin, Jar Jar, and R2D2 in the background), while Two and Three shifted to Obi Wan, Padme, and Anakin. By all indications, The Force Awakens will follow this tradition with Finn, Rey, and Poe Dameron.

Twilight changed things up a bit by making the girl the protagonist surrounded by two guys caught in the infamous love triangle of Bella, Edward, and Jacob. Even in a story written by a woman for girls with a female in the lead, the emphasis was still on the guys.

Even Indiana Jones was put into this formula in Temple of Doom when he had to share his adventure with the screaming Willie Scott and his half-pint sidekick Short Round. Many more examples of this can be found in movies and books.

I have to admit to using this cliché as well. One of the first long-form stories I wrote, Survivor’s Cave, is an action-adventure featuring teenagers–the hero, the girl, and the sidekick. Despite a couple other supporting characters along for the ride, those three were the focus of the story. Maybe I’ll dust it off and change things up a bit, like perhaps making the girl the protagonist who is the catalyst for the adventure.

What makes this dynamic work? Is it just that we expect the hero to be a guy, so the other two characters just fall in place? Obviously, not every story is written with these archetypes, but so often that’s the default characterization. Maybe we writers should recognize if we’re falling into that pattern that we should do something to twist it around and do something more original. Surprise the audience–it just might work.