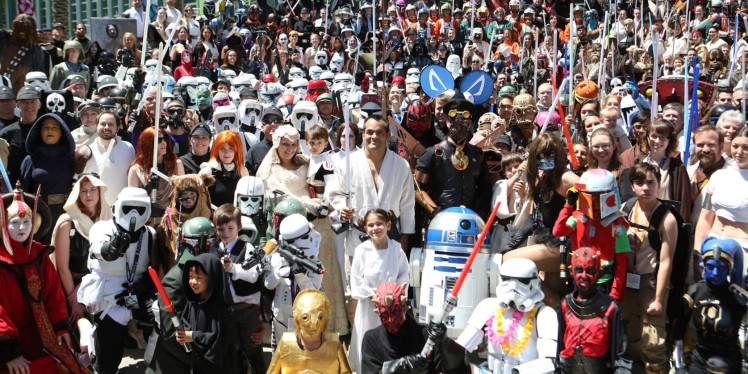 I freely admit that I’m a nerd. For my entire life, I’ve been into Star Wars and Star Trek and am a huge aficionado of science fiction, fantasy, and horror both in print and on the screen. I love comic books, animation, and genre art. Many of the stories I’ve written and films I’ve made are speculative in nature. I am actually on staff for a comic convention. In other words, I get fandom.

That said, there is a fine line between being a fan–whether it’s of a genre, a franchise, or an artist–and being obsessed with it. Being a fan provides excitement in your life (the more I think about Star Wars: The Force Awakens, the more my adrenaline pumps through my system), but obsession is unhealthy. The single-mindedness of focusing on one particular thing or person robs you of so many other wonderful experiences in life. The classic geek rivalry through the ages is Trek vs Wars–but there’s room for the love of both, and so much more. For instance, I am also an avid camper and backpacker, and that has absolutely nothing to do with science fiction (except for that one time, but that’s a different story).

A successful author I know recently had a situation where fans were upset due to an element in the author’s books that was written differently than the fans expected. Outrage led to poor reviews. How dare this author change up a formula a bit! I picture Annie Wilkes pulling out the mallet and ordering this writer to go back and burn all the copies of that book and whip up a new one that is written the way she expects it to be done.

We see this all the time. The Force Awakens can’t possibly have a black Stormtrooper because they’re all clones of Jango Fett–ignoring the fact that this new movie is set about 60 years after Attack of the Clones and things just might change in that time, as well as the other fact that we know nothing about the story other than what we see in the trailer. Spock and Uhura can’t possibly have a romance because that was never in the original show–which of course is the point of JJ Abram’s 2009 Star Trek, set in an alternate timeline where anything can happen.

TV shows change actors, movies get rebooted, book series introduce elements that are shocking, cosplayers change up the costumes of their favorite characters–all to the consternation of obsessed fans that demand that their favorite whatever remains exactly as they remember and love it. Alteration is an Unforgivable Curse, and the person responsible often falls prey to the modern version of a public lynching.

I too often feel my blood boil when I hear of a favorite movie of mine that gets remade, because of course how could they possibly think to touch such a singular film? The results can range from surprisingly good (Evil Dead) to so-so (Robocop) to head-shakingly bad (Poltergeist). Do these new versions detract from the originals in any way? Only if audiences know the upstarts in place of the classic version, in which case they need to be educated. The funny thing is with all three of the aforementioned films there were sequels of varying quality, so already the progenitor has been sullied.

Ultimately, anything new done to your fandom will be different from what came before–that’s kind of the point. It may not be to your liking, and that’s fine. But remember to question whether raging at the new version and its creators is healthy. You may not really be able to hobble those responsible for the desecration of what you idolize, but you will bring negativity into your life over something that’s supposed to create joy.